Who Are Those Singer and Musicians? ~ Antonio Aguilar 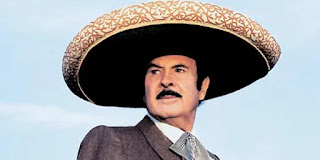 Antonio Aguila was born on May 17, 1919, in Villanueva, Zacatecas, Mexico. He was a Mexican singer, songwriter, actor, producer, screenwriter and father of the famed composer, singer Pepe Aguilar. Known as “El Charro de Mexico” (The Horseman of Mexico), he is credited to have recorded over 150 albums, which sold 25 million copies, and performed in more than 120 films. Aguilar was best known for his love for singing traditional Mexican folk songs known as rancheras and ballads. His films tended to revolve around rural themes, the Mexican Revolution, which included portraying revolutionary figures Pancho Villa and Emiliano Zapata, which earned him a Latin ACE Award for Best Actor for the 1970 film titled Emiliano Zapata. Aguilar passed away on June 19, 2007, in Mexico City due to complications from pneumonia leaving behind a tremendous invaluable contribution to Mexican music and cinema alike.