50th anniversary of the premier of “Savage Guns”

Today marks the 50th anniversary of the premier of “Savage Guns”. Directed by Miles Deem (Demofilo Fidani) and starring Robert Woods, Dean Stratford, Dennis Colt, Custer Gail and Simone Blondell. The fil tells the story of  Mash Flannigan who dominates, a small town in the West, with his thugs who kill anyone who tries to rebel against his abuse. In one of the many shootings, he injures Sam Wallash, and kills his friend. Young Sam swears to avenge him, and aided by Margie and her father, he is able to recover from his wounds and soon regains his strength. Sam then goes in search of the killers. He once again, is savagely beaten by the men of Donovan in the local saloon. Meanwhile Flannigan and his thugs continue their bullying and killings. Flannigan organizes a wrestling match, although rigged is presented to the public as an honest athletic match. Sam begins his revenge; gradually eliminating, with unerring aim, all Flannigan’s henchmen and a paid killer hired to kill him, until he eliminates them all. 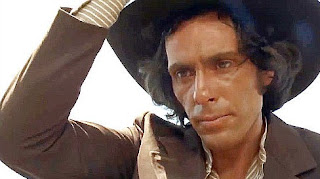