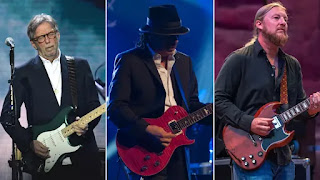 The PRS-playing guitar powerhouse teased the trio’s prospective project will pay homage to Ennio Morricone, and be sonically comparable to The Good, the Bad and the Ugly

It’s been the year of collaborations thus far for Carlos Santana, who recently teamed up with a number of electric guitar players for his most recent album, Blessings and Miracles, which features Chris Stapleton, Steve Winwood, Kirk Hammett and more.

If his recent comments are anything to go by, though, the 15-track album – which also reserved guest spots for Rob Thomas, American Authors, Ally Brooke, Diane Warren, Mark Osegueda and Avi Snow – is only the start of Santana’s plans. To continue his collaborative form, the PRS-playing guitar powerhouse has now teased an instrumental project with Eric Clapton and Derek Trucks.

And, judging by what’s been hinted at, it could be one of Santana’s most intriguing – and certainly most eclectic – offerings to date.

Santana spilled some tentative details in this month’s holiday issue of Guitar World, teasing the trio have a very particular sonic niche they hope to occupy.

When asked about his future projects, Santana commented, “I believe it’s important to constantly expand, expand and expand – by always creating and challenging myself. I’m looking forward, at the moment, to creating an album that is purely instrumental.

“Nothing will be geared up to radio or radio-friendly commerciality,” he continued. “In a way, I’m picturing something like a soundtrack, perhaps in the vein of an Ennio Morricone score for an imaginary spaghetti western – The Good, the Bad and the Ugly, that kind of thing, you know?

“I talked about this with Eric Clapton and Derek Trucks, and that is something we will be working on together in the near future. We aren’t going to be concerned about songs; it will be more about moods.”

No other details were given, though if the final product sounds anything like we imagine, count us in.

Elsewhere in the interview, Santana touched upon the philosophy and secrets behind his trademark tone, commenting, “If there is such a thing as a secret, I guess it would be to not think about what you are doing.”

Name-dropping Peter Green and B.B. King as the inspirations behind his approach, he continued, “Emotion, passion and feelings are what we all have, and if you keep yourself open, you can let these things express themselves through your playing. I grew up on Peter Green and B.B.

“The essence of that is that they let themselves honestly express what they were feeling through their instrument. B.B. King was originally the template for how I wanted to create my voice on the guitar, but after that period that players go through when they try to sound like their heroes, they have to find out who they are.

“I am very grateful that I’ve found something that is uniquely my own style.”

Blessings and Miracles, Santana’s 26th studio LP and his first-ever to be recorded without the aid of a Mesa/Boogie amp, was released on October 15 and is available now via BMG.

Head over to Magazines Direct to scoop the year-end legends issue of Guitar World, featuring the full Santana interview, a cover feature with The Edge and a previously unpublished conversation with the Cramps’ Poison Ivy.