We continue our search for filming locations of “Run, Man, Run”. After Cuchillo discovers that Dolores has left him he continues his journey with Salvation Army preacher Penny Bannington. They arrive at a small Mexican village and she begins a sermon. The villagers are only present because of the food she will serve them after her preaching. Suddenly Cuchillo breaks out into a revolutionary diatribe that the villagers don’t have to be beggars, that the bread rightfully belongs to all of them. They should steal the bread if they are hungry as it is their right as human beings to feed themselves. Utter chaos breaks out as they all rush for the bread and soup. A ferally officer makes his way through the crowd and orders Cuchillo to stop. We next see Cuchillo strung up again. Penny objects but is slapped and thrown into a pigsty. Then Cuchillo begins to berate the officer and calls him names. The officer to shut Cuchillo up shoves a stick of dynamite in his mouth and lights it. Penny falls to her knees and begs God to send an angel of flames. Suddenly, in the distance a rumble is heard and with the wind a gang of Mexican Revolutionaries, led by Santillana rides in and  saves the day.

This scene was filmed in the old village of Polopos, Spain. 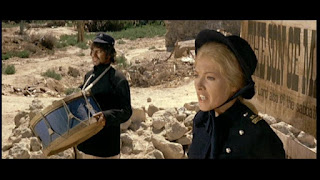