50th anniversary of the premier of “Black Killer”

Today marks the 50th anniversary of the prmier of “Black Killer. Directed by Lucky Moore and starring Klaus Kinski, Fred Robsham, and Jerry Ross. The film tells the tale of the town of Tombstone which is dominated by the Mexican O’Hara Brothers (Antonio Cantafora. Enzo Pulcrano. Calogero Caruana, Vincenzo Maggio, Roberto Danesi) and their vicious gang of henchmen. They run the town with an iron fist, manage the local tavern, and sexually harass the barmaid, Consuela (Tiziana Dini), at every opportunity. Sheriffs last about a day, and the O'Hara’s dispatch the new sheriff in short order by blowing up his office, shooting him repeatedly, stringing him up in the center of town, and sticking the wanted poster of Pedro O'Hara to his chest with a variety of knives. A Federal agent sent to investigate doesn’t even make it as far as the town’s border. Life is difficult enough for the local judge, who has to keep finding replacements for the sheriff when a mysterious man in black arrives in town. Claiming to be a lawyer named James Webb (Klaus Kinski) he carries a large array of law books and takes up residence in the hotel. He seeks out the judge (Dante Maggio) and carries out some strange conversations. He seems to be interested in some land that the O’Hara brothers, have stolen. Not long afterwards the O’Hara brothers kill the sheriff and Webb retaliates by killing a couple of their henchmen by using pistols hidden away in his law books which are activated by bookmarks tied to strings attached to the triggers of the guns. Then another stranger arrives in town named Burt Collins (Fred Robsham). It seems Collins has come to Tombstone to visit his brother Peter who lives on a small ranch on the outskirts of town with his Indian wife. Burt spends the night at Peter’s house which is attacked by the O’Hara brothers who kill Peter (Jerry Ross) and rape his wife Sarah (Marina Mulligan). Burt tries to help but is beaten mercilessly and left for dead. After recovering he and Sarah head for the O’Hara ranch for revenge. In the end it is revealed that Webb was sent as an undercover agent to help clean-up the O’Hara brothers and restore law and order to Tombstone. 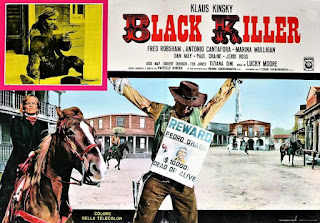