Best spaghetti Westerns | In the 1960s and ’70s, a new style of film began to emerge in Europe: the spaghetti Western. On the surface, these films mirror classic American Westerns like “3:10 to Yuma” and “High Noon.” However, a closer look reveals that they are actually quite different. Aside from the language element, many of these foreign-born films have more action and less dialogue than their U.S. counterparts. An expressive musical score — come to be epitomized by Ennio Morricone’s orchestrations — and an abundance of violence also characterize the genre. To provide a closer look at this subgenre of film, Stacker compiled data on the top Westerns of all time, narrowed the scope to spaghetti Westerns (Italian-produced Westerns from 1964-1978), and ranked them by IMDb user ratings, with ties broken by votes. To qualify, the film had to have at least 1,000 votes on IMDb. Whether or not you believe Westerns are your thing, read on to see our list of the best spaghetti Westerns. Maybe you’ll find a new favorite! (Canva) 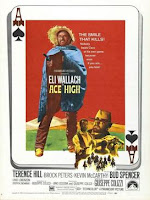 25. Ace High (1968) | Director: Giuseppe Colizzi - IMDb user rating: 6.6 - Runtime: 122 minutes | After a wrongly accused thief escapes the hangman's noose, he forms an unlikely alliance with two bounty hunters and sets out to exact revenge on the people who framed him years ago. “Ace High” is the second film in a trilogy starring Terence Hill and Bud Spencer, which begins with “God Forgives … I Don’t!” and ends with “Boot Hill.” (Cronocinematografica S.p.a.)

24. Tepepa (Blood and Guns) (1969) | Director: Giulio Petroni - IMDb user rating: 6.7 - Runtime: 103 minutes | A lesser-known spaghetti Western, “Tepepa” is about a Mexican revolutionary leader saved from impending execution by an English doctor who wishes to dole out his own revenge after the death of his fiancée. Orson Welles stars as the ruthless Colonel Cascorro, and the actor is rumored to have made the atmosphere on set absolutely terrible. (Filmamerica)

22. The Cruel Ones (The Hellbenders) (1967) | Director: Sergio Corbucci - IMDb user rating: 6.8 - Runtime: 90 minutes | Also known as “The Hellbenders,” “The Cruel Ones” follows a fanatical Confederate officer who desperately wants to reignite the Civil War. To fund his scheme, the officer, played by Joseph Cotten, embarks on a long and perilous journey to collect a large sum of money hidden inside the coffin of a fallen compatriot. (Alba Cinematografica)

21. The Return of Ringo (1965) | Director: Duccio Tessari - IMDb user rating: 6.8 - Runtime: 95 minutes | The only official follow-up to “A Pistol for Ringo,” "The Return of Ringo” sees Giuliano Gemma reprise his role as Union officer Montgomery Wood. After returning from the war, Wood discovers that his town is now ruled by a gang of Mexican bandits, and he undertakes a revenge plot after suspecting that his wife has been unfaithful. Darker in tone and content than its predecessor, the film manages to paint a more complex picture of the hero than many other spaghetti Westerns. (Produzioni Cinematografiche Mediterranee (PCM))

20. Sabata (1969) | Director: Gianfranco Parolini - IMDb user rating: 6.8 - Runtime: 111 minutes | The first film in a trilogy, “Sabata” follows a gunman, a banjo player, and a tramp who team up to foil the corrupt leaders of their town, all of whom are plotting to rob the local bank. The film is chock full of gunfights and action sequences, with one eagle-eyed viewer counting 75 bodies dropped through the 111-minute run time. (Produzioni Europee Associate (PEA))

19. Run, Man, Run (1968) | Director: Sergio Sollima - IMDb user rating: 6.9 - Runtime: 120 minutes | While not a direct sequel to “The Big Gundown,” “Run, Man, Run” continues the story of Cuchillo, a character introduced in the first film. In this chapter, Cuchillo competes against groups of bandits and other lone mavericks to find a stash of hidden gold worth $3 million. Deceptions, double-crosses, and a whole bunch of action are sure to keep even the most skeptical viewer glued to the screen. (Mancori)

18. A Bullet for the General (1967) | Director: Damiano Damiani - IMDb user rating: 7.1 - Runtime: 115 minutes | El Chuncho and his team of ruthless bandits rob a train, intending to sell the stolen arms to a rebel general. During the heist, they encounter a helpful American, Bill Tate, who may be more than he appears. Critic Sean Axmaker notes that “A Bullet for the General” is “directed like a ’20s gangster picture … where life is cheap, loyalty is rare, and rival gangs constantly battle for guns and contraband.” (M.C.M.)

17. Day of Anger (1967) | Director: Tonino Valerii - IMDb user rating: 7.1 - Runtime: 111 minutes | Legendary spaghetti Western actor Lee Van Cleef, star of other big hits like “For a Few Dollars More” and “The Good, the Bad and the Ugly,” plays a gunslinger who goes off the rails in “Day of Anger.” As the new guy in town, Frank Talby (Van Cleef) acts as a mentor to an unassuming janitor, Scott Mary (Giuliano Gemma). However, as his young prodigy grows in skills and confidence, their fragile power balance is upended, and things sour quickly. (Sancrosiap)