Who Are Those Guys ~ Nick Cravat 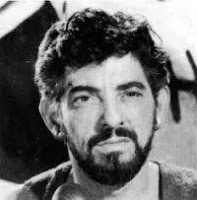 Nicholas Cuccia was born in Manhattan, New York City on January 10, 1912. He took his stage name Cravat, from a character in a play he had seen and liked.

Cravat and Burt Lancaster met as youngsters at a summer camp in New York and became lifelong friends. They created an acrobatic act called Lang and Cravat in the early 1930s and joined the Kay Brothers circus in Florida. The pair worked at various circuses and in vaudeville. In 1939, Lancaster suffered a hand injury that ended their act. They would later reunite. He co-starred with Lancaster in nine films. He’s also remembered as the "gremlin" on the wing of an airplane in the 1963 Twilight Zone episode "Nightmare at 20,000 Feet" with William Shatner.