50th Anniversary of the Premier of “Mallory Must Not Die”

Today marks the 50th Anniversary of the premier of “Mallory Must Not Die”. Directed by Mario Moroni and starring Robert Woods, Renato Baldini, Gabriella Giorgelli and Teodoro Corrà it tells the story of Larry Mallory (Woods) a famous gunslinger and Hasper (Baldini) a former Yankee army colonel who wishes now to enjoy in peace the rest of their lives. They become partners and purchase a large farm belonging to a man named Jefferson. After the conclusion of the deal, Jefferson is killed and robbed of the proceeds of the sale by two henchmen of Hambler and Block, who also threatens to kill Mallory and Hasper and to take over their farm. Mallory, who has since befriended Corra, Hambler’s younger sister, is warned of an attack is by Hambler’s henchmen. The two sides clash with the criminal and his men, Hasper is killed, while Mallory, badly wounded, is lovingly nursed back to health by Corra. Once well again, the gunman is reluctant to kill the brother of the woman he loves and to avenge the death of his friend: it becomes not necessary, however, because Hambler and Block, after a dispute arises between them, end up with killing each other.

My Name is Mallory – English title

Mallory Must Not Die – English title 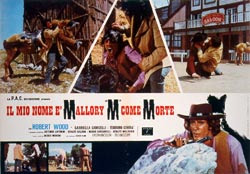