50th anniversary of the premier of “Paid in Blood”

Today marks the 50th anniversary of the premier of “Paid in Blood”. Directed by Paolo Solvay (Luigi Batzella) and starring Jedd Cameron, Donald O’Brien, Alfredo Rizzo and Krista Nell. The film tells the story of Gunslinger Tom Carter, learns that a certain Ringo Brown killed his brother Jerry during a robbery. Carter is determined to avenge his brother’s death at the town of Green Waters, which is dominated a greedy landowner named Shannon. He’s backed by Rast, his right arm and wants to force the peasants who still resist him to sell their land for a pittance. Convinced to help the people by a gold prospector, Jack Buchanan, whose life he saved, Tom manages to defeat the numerous attempts made to kill him, on the orders of Shannon, by Rast and his henchmen, until they decide to attack in mass Buchanan's farm, where Carter has found refuge. On the eve of the attack Tom is taken by Green Waters doctor to a man mortally wounded by a snake, who tells him he’s Ringo Braun and had killed at the behest of Jerry Shannon. In the ensuing shootout, Tom and Buchanan manage to exterminate Rast’s gang. Shannon also dies, so Tom does not have to abandon the town, in the company of the woman he loves decides to settle down. 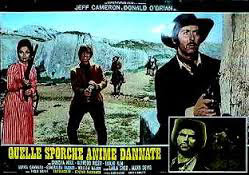