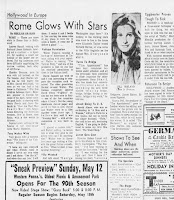 ROME- There are more stars in Rome than in Hollywood.

Lauren Bacall, visiting with husband Jason Robards, bawling out a chauffeur – in Spanish, for sending a small car instead of a larger one ordered. But big American cars have difficulty negotiating the narrow, cobbled back alley of old Rome.

Charles Bronson, arm in arm with Jill Ireland on the Via Veneto. And Charles telling me he will marry the ex-Mrs. David McCallum, “as soon as we can find a big house in California” (for five children between them) Bronson, popular in Europe because of his dark, rather sinister good looks, is starring with Jason Robards in “How the West Was Really Won”, with Sergio Leone directing the American western, first in Rome, then Spain, with a few weeks in Arizona.

Sophia Loren, sobbing at the funeral of her sister-in-law Anna Maria Mussolini.