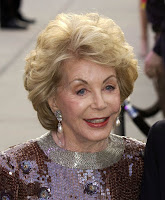 Film producer Anne Douglas, philanthropist and widow of Kirk Douglas, Died at her Beverly Hills, California home at 102. She was born Hannelore Marx on April 23, 1991 in Hannover, Lower Saxony, Germany. She worked for director John Huston as a location scout and assistant on Moulin Rouge (1952), then began a three-year stint in 1953 as head of protocol at the Cannes Film Festival, scheduling parties and making sure they were filled with celebrities and media. She later became a casting director and a film producer after marrying Kirk Douglas in 1954. Anne was a producer on the 1973 Euro-semi-western “Scalawag”.
Posted by Tom B. at 7:44 PM