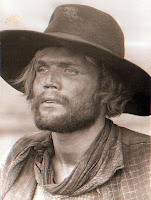 Dan van Husen was a friend to many of us who live in England, Spain, Germany and the U.S.A. He loved to mingle with his fans and reminisce about his career especially in Spaghetti westerns.

Dan van Husen was an actor with a very unique face. “I am convinced that they hired me in the cinema more for my face than for my talent. Federico Fellini and other great directors chose me for their films because of my face. I have a profile that is not easy to find in the cinema”.

van Husen came to the world of cinema almost by chance. He was in Madrid in 1968 as a disc jockey at the Hotel Meliá. “I was really well paid. There Duccio Tessari saw me and offered me a job to work on a film. The first film was with Giuliano Gemma. It was shot in Madrid and that's how I started in the cinema”.

“The experience was very positive and I really liked it. From that moment I preferred the cinema to playing records. They paid me much more and in 1969 I shot the first film in Almería. Over the years I have did theater in Germany and made a lot of money. In 1994 I had already considered retiring from the cinema. But I didn't do it, because the camera is like a drug and you can't put it down,” he pointed out.

In 1970, Dan van Husen bought a house in Mojácar that cost him 100,000 pesetas. “At that time it was a lot of money. Two years later I couldn't pay the mortgage and I decided to sell it for 90,000 pesetas. I lost 10,000 pesetas. It's a shame that I don't have the house now, because it was in the center of Mojácar”, he confessed to this newspaper.

In an interview for Diario de Almería, in 2016, Van Husen said “I'm a bit tired, I can't move like before and I'm living in England with my wife and I'm doing very well there. I have many friends in that country”. Dan died at his home in Ilminster, Somerset, England on May 25, 2020.