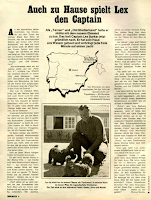 As well as at home Lex always plays the captain.

While playing both 'Tarzan' and 'Old Shatterhand' he had nothing to do with the watery elements. Captain Lex Barker is now thoroughly enjoying renewing his love of the sea. He has built his house on the water and spends every spare minute on his moored yacht.

Along the Spanish Mediterranean coast, four kilometres from the gates of the small town of San Feliu de Guixols, in the north west tip of Spain, the American Navy had built a base a year ago, which he has yet to visit. Above our heads, 25 meters high, a U.S. Navy flag flutters in the wind, indicating that Captain Lex Barker, known on all seas and continents as 'Tarzan' & 'Old Shatterhand', resides here.

"Normally it blows on my yacht, on the 'Peter Pan II.'," explained Lex BRAVO during our visit to his villa the 'Mas Ma'anas', "but now the boat is hibernating in the port at Barcelona. So, I raised the flag here. During the summer, the 'Peter Pan II' is located at San Feliu de Guixols."

He doesn't have to tell his visitors that he was in the Navy during World War II and is still enthusiastic about everything to do with the sea. In every corner of his eight-room home, you will come across the souvenirs that prove it.

In his study there is a placard on the house bar which reads 'Captain Alexander Barker' which is printed in golden letters. Lex continues: "I got it from my manager while in North Africa back in 1944 when I became a captain."

In the saloon there can be found old ship equipment memorabilia : a compass, a water scale and a huge telescope. Lex doesn't know the exact age of the ancient instrument, but it looks like Columbus had already taken on his first look at America.

And on each wall hang pictures with a nautical motif.

There is also no room in the Barker villa - apart from the kitchen and two bathrooms - that one cannot view of the sea and the coast. For Lex, it's exactly 70 steps leading down to his small beach - steps that he had to cut into the rocks himself.

"It's been five years since I found the property here. But it wasn't until a year ago that I was able to move in with my wife [actress Carmen Cervera, aka Tita aka Maria del Carmen Rosario Soledad Cervera y Fernandez de la Guerra]. We thought it would never be finished. We had to have half the hill ripped away to create the area for the construction.

Lex smiles: "But now we've done it. Although there is still work to be done. Today, for example, lemon trees are being planted behind the house. I'm curious how long it will be before I can harvest for them for the first time!"

Wild clamour pours out of the kitchen, and when his wife Tita opens the door, three tiny black poodles shoot out towards us.

Lex can't really be thrilled with the three roaring balls of wool: "I'd rather have a German shepherd again, like I had over there in America." The dog named

'Pulco', had been Lex Barker's most loyal friend while in Hollywood. Fifteen years ago, when his career took him to England, he had not been allowed to take the dog with him. English laws forbade it. His friend fellow actor Efrem Zimbalist Jr. took in 'Pulco' for Lex. For three weeks after departure, the faithful four-legged friend did not touch any food. It wasn't until Lex called from London and heard 'Pulco' on the phone his appetite came back.

And what else is Lex missing, other than a shepherd dog for his good fortune? He pauses,

"Actually nothing - except a new stereo system for my car. The last one I had bought in Munich, but it was stolen after only three days. Now I will soon be back in Munich for the dubbing of my new film, with Roy Black, called "Wenn du bei mir bist". Then, I will get a new stereo. What else do I want? A storm-free summer! And a cruise on the 'Peter Pan', from Rome, to Athens - which I will like immensely!"

Notes: At the time of the article Lex had just made "Wenn du bei mir bist" & "Aoom" (both 1970), and was waiting to hear back from Rialto about their planned revival film "The Heirs of Winnetou" (in preparation between 1970-72).

Barker met Tita while filming "Gern hab' ich die Frauen gekillt" aka Killer's Carnival in 1965, and she appeared with him in "Mr. Dynamite" in 1967.

Following his death in 1973, she was married to actor/producer Espartaco Santoni in 1975.