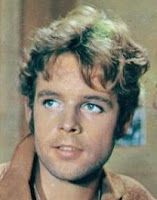 German film, TV and voice actor Thomas Fritsch died in a senior citizens facility in Berlin, Germany on April 21, 2021. He was 77. Fritsch was born on January 16, 1944 in Dresden, Germany but fled to Hamburg with his family as a toddler, he attended a drama school, graduating with a degree where he trained as an actor. He was discovered for film while still at school. “Das schwarz-weiß-rote Himmelbett” (The Black-White-Red Four-Poster Bed) was his first big box-office success in 1962, followed by roles in films such as “The Last Ride to Santa Cruz” and “Uncle Tom's Cabin” and “Three Men in the Snow”. He switched to TV in the 1970s and is probably best known as the German voice of Scar in 1994’s “The Lion King” and its 1998 sequel “The Lion King II: Simba’s Ptide”. Fritsch appeared in two Euro-westerns: “The Last Ride to Santa Cruz” (1963) as Carlos and “Legend of a Gunfighter” (1964) as Chris Harper. Fritsch was also the voice of Eli Wallach in the deleted scenes of the restored version of “The Good, the Bad and the Ugly”.
Posted by Tom B. at 8:59 AM