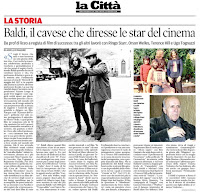 Ferdinando Baldi, born in Cava de ' Tirreni on May 19, 1927, directed more than 70 films, some of which featuring first-rate actors: Orson Welles (Oscar Award); Allan Lard; Terence Hill and many others. Several music stars in his films: Ringo Starr from the Beatles; Lucio Dalla, Caterina Caselli; Rita Pavone and several others without forgetting a very young Renato Zero. The group wants to thank the daughters of the director, who passed away on November 12, 2007, and granddaughter Tiziana Trabalza who sent us several anecdotes and news stories. We remind you that Baldi is the first film to portray our Cava de ' Tirreni in a feature film. The full article and photos are attached. Happy reading from the Cava Stories group!

Choose the job you love and you won't work a single day in your life. 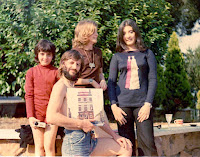 This is how he recites the highest celebrity attributed to Confucius and it's probably what director Ferdinand Baldi thought when he decided to change his job and life. From Latin and Greek professor to seventh art. Ferdinand was born in Cava de ' Tirreni on May 19, 1927 and, following his degree in letters, became a high school professor. His life changed after meeting with producer Tiziano Longo, who let him read his written subjects almost as a joke. He never thought of an interest in the cinema world; but Longo animated his propensity to write subjects and enriched him to direct a film. ′′ The Price of Honor ′′ was born, a film that featured Salernitano Mario Vitale as the protagonist. That first movie followed more than 70 ranging between all genres: from romantic comedy to western, from peplum to thrillers. Little at a time the professor (so called not only for his previous profession but for his quiet, never uneducated way) made his way in the world of cinema. Already his second film called famous Italian cinematography names. In fact, they intervened, at least among the best known: Nino Taranto, Carlo Croccolo, Ugo Tognazzi and Raymond Vianello. In 1955 he wanted to make film, maybe for tribute to his native land, Cava de ' Tirreni. In the film ′′ Rememme ′′ (the first track that depicts the Metellian valley in a film) he decided to use views and the Metellian village for the setting. During these years he had a meeting with Pasolini and other directors who were interested in the so-called ′′ A ′′ films. Baldi asked how many films they could make in a year. He was replied: ′′ Year? We'll make one every 3 ". That's how he decided to devote himself to the films classified as ′′ B ". Maybe so catalogued but certainly not for the names of the interpreters. In 1960 he directed ′′ David and Goliath ′′ where King Saul was portrayed by Oscar Orson Welles (which will also follow in the film ′′ The Tartars ′′). Not only Welles; in the following years: Alan Ladd, Arnoldo Fo à, Alberto Lupo. The western genre was one of Baldi's most beloved and in 1966 it toured Texas goodbye with Franco Nero. Musical comedies were not missing and in the film ′′ I don't protest, I love ′′ (some parts recorded in the splendid Vietri on the Sea) directed Caterina Caselli, a young Terence Hill (Mario Girotti) and Renato Zero (one of the dancers). The next year he directed the western musical with Rita Pavone, Terence Hill, Lucio Dalla and Teddy Reno (the film was not successful due to Pavone's relationship with the married Reno). In ′′ Prepare Your Coffin!" he gave Django a new face. The character, consecrated by Sergio Corbucci's homonymous film and portrayed by Franco Nero, was captured by Baldi. Ferdinando managed to convince the producer and with a winning ruse, the lead role was given to Terence Hill (emblematic the dead case dragged by the protagonist, the real brand of the film). But Baldi's polyhedricity also came out in some films filmed with the possibility of the 3D view, including ′′ Comin ' at Ya!". In 1971 he directed one of the most popular musicians on the world stage: Ringo Starr of the Beatles. The film in question is ′′ Blindman ′′ (starring Tony Anthony), a blind gunfighter who, for money, strives to procure women to miners. Various films will follow: ′′ Afyon opium ′′ with Ben Gazzara that years later will be remembered as ′′ the professor of Vesuviano ′′ in the film ′′ Il Camorrista ′′ focusing on the reformed camorra and the boss Raffaele Cutolo; the double film of ′′ Carambola ′′ with Paul Smith and Michael Coby remembering Bud Spencer and Terence Hill in the very lucky series of ′′ Trinity "; ′′ The Girl of the Wagon ′′ featuring the beautiful Silvia Dionisio; ′′ Travel Company ′′ with Gastone Moschin and ′′ Warbus ′′ with the famous Aristotles of Aristotles of Banfi (aka urs althaus). A life full of travel and cinematic betting (remembers a war movie filmed in the Philippines); especially happy with his wife Rosetta Giarnieri and her two daughters Marina and Alessandra without forgetting the affectionate presence of her niece Tiziana Trabalza who dedicated to her uncle also a facebook group named ′′ ferdinando baldi ". 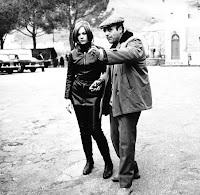 Baldi died in Rome on November 12, 2007, far from his native land that maybe he has a duty to remember this son dedicated to cinema. We'll see...