Terence Hill private: Did you know THIS about Bud Spencer's film companion?

When the fists and witty sayings fly in the film, Terence Hill and Bud Spencer are not far away. Terence Hill, the blond half of arguably the most popular film duo in film history, likes it less brutally privately - you have to know that about the actor. 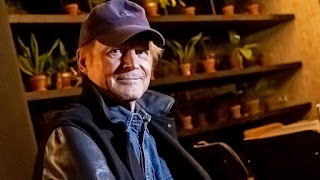 Terence Hill and Bud Spencer conquered the film screen! Arguably the most iconic duo in film history, they still have a loyal fan base - and on March 29, 2021, they have reason to pop the corks when Terence Hill celebrated his 82nd birthday.

Admittedly, the actor is not seen at the best of intentions - maybe it is because of the genes, perhaps because of the ascetic way of life. Terence Hill, who was born Mario Girotti in Venice on March 29, 1939, has been a real sports cannon since a young age and indulges in the vegetarian way of life. While his canvas buddy Bud Spencer strengthened himself with pasta during filming breaks, the wiry Hill preferred to grab apples and rice cakes.

Terence Hill has a very special relationship with Germany

In his childhood, however, Terence Hill may have enjoyed German specialties as well - after all, the Blond actor grew up in Germany as the son of an Italian father and a German mother. When little Mario was four years old, Girolamo Girotti and his Dresden-born wife Hildegard Thieme moved to Lommatzsch, not far from the present-day state capital of Saxony - here the later screen star experienced the devastating bombing raids in the Second World War. Even today, Terence Hill is intimately connected to his German roots and still speaks his "mother tongue" fluently and almost accent-free.

Did you know? Terence Hill makes sweet cats happy alongside his acting career

After a few years in Germany, the Girotti family moved back to Italy and settled in the town of Amelia. Here the blond-haired boy spent his childhood with his two brothers Oduardo and Piero and completed his schooling. Those who stroll through the town of Umbria today and come to via della Repubblica can even enjoy the culinary talent of Terence Hill's family: The ice cream parlor "Gelateria Girotti", once run by Terence Hill's ancestors, was reopened a few years ago by Terence Hill and his son Jess and has since become a true pilgrimage site for ice cream fans and Terence Hill admirers.

[The legacy of Terence Hill and Bud Spencer lives on: Christiana Pedersoli and Jess Hill marvel at the devotionals from the film career of their famous fathers at the Terence Hill Museum in Lommatzsch, Saxony.]

By the way: If you don't want to travel to Italy, you can also try the Girotti ice cream in our latitudes, because Dresden has been offering the "Terence Hill Ice Saloon" since 2019, which offers the ice cream made according to family recipes. And if you like, you can dive into Terence Hill's former home Lommatzsch after the sweet refreshment: The outdoor swimming pool of the Saxon community was christened "Terence Hill-Pool" in honor of the actor.

Terence Hill, then still under his birth name Mario Girotti, gained his first experiences as a film actor in the Italowesterns, now known as spaghetti vests. The Venetian-born player owed his dazzling appearance to the Italian sports cannon - the filmmakers attested to the acting talent as a resemblance to Western hero Franco Nero. Only the name Mario Girotti did not fit the producer in the stuff - in order to become more interesting for the international cinema audience, Mario Girotti was presented in 1967 a list of 20 different pseudonyms from which he should choose an artist's name. The choice was finally made on Terence Hill - the young actor was reminded of the initials of his mother Hildegard Thieme's name. By the way: Terence Hill's companion Bud Spencer was actually called differently. The bearded Haudegen was born Carlo Pedersoli and was inspired by his fondness for Budweiser beer and his favorite actor Spencer Tracy.

What did Terence Hill do after the death of film partner Bud Spencer?

Terence Hill and Bud Spencer made a total of 18 films together, leaving their fans with a wealth of beating scenes and distinctive sayings. After the death of Bud Spencer in June 2016,Terence Hill continued solo in front of the camera, shooting the series "Don Matteo", "The Mountain Police" and the movie "My Name is Somebody".

Terence Hill private: Wife Lori and son Jess are all his luck

The year 1967 also had another incisive significance for Terence Hill: Two months after he had met a certain Lori Zwicklbauer, an American woman with Bavarian roots, during filming, the wedding bells rang for a swarm of women and his sweetheart.

Death drama about son Ross Hill: Terence Hill had to cope with this stroke of fate

Two years later, the couple had an offspring when son Jess Hill was born. The family was completed in 1973 with the birth of his adopted son Ross Hill. Terence Hill even appeared together with him for the movies "Renegade - Terence Hill and the Kaziest Gaul in the World" and ""Nobody Skins Like Don Camillo" in front of the camera, but Ross Hill died far too young in a tragic car accident in 1990.

Blue-eyed be vigilant! Are Terence Hill's eyes so bright by nature?

Terence Hill owes his legendary reputation to a swarm of women not only to his well-trained figure, but also to his bright blue eyes. Persistent rumors that the native Italian had embellished his gaze with colored contact lenses, however, have no truth: Whenever he was approached in interviews, he always emphasized that Mother Nature alone is responsible for his fascinating gaze.