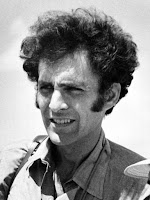 American maverick director Monte Hellman died in a Palm Springs, California hospital on April 20 after a fall in his home. He was 91. Hellman directed such films as such films as “Two-Lane Blacktop,” “The Shooting” and “Road to Nowhere.” Born in Brooklyn, New York on July 12, 1932, Hellman was an exec producer of Quentin Tarantino’s 1992 “Reservoir Dogs.” He was also a directing teacher at California Institute of the Arts. Monte directed the Euro-western “China 9, Liberty 37” starring Warren Oates, Jenny Agutter and Fabio Testi in 1978 and was also the director of 1977’s CBS-TV prologue for “A Fistful of Dollars”.
Posted by Tom B. at 6:06 PM