We continue our search for filming locations of “A Bullet for the General”. The guns are unloaded and they are counted by the Elias’s accountant. While this is going on, Bill sours the camp looking for General Elias. He spots him on a watch tower. The young boy Bill saw at the train station in the beginning of the film pokes him with a gun and asks him if he now likes Mexico and Bill says, “He still doesn’t like it.” He says goodbye to the boy and rides off. 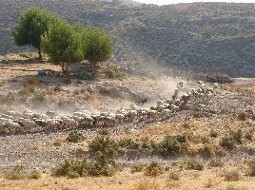