After the set for Flagstone was made for “Once Upon a Time in the West” in La Calahorra, Spain in 1968, it was reused again in “My Name is Nobody” with Terence Hill in 1973. But in between, it was remodeled and appeared once again in “The Price of Power” (1969) with Giuliano Gemma and looked quite differently. 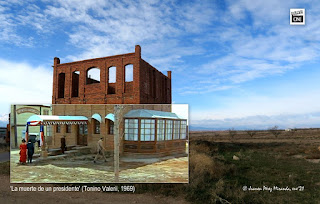 Some of the brick buildings remain as mere shells of there former selves today with a road running right through part of the town set.
Posted by Tom B. at 7:40 AM