We continue our search for filming locations of “A Bullet for the General”. Arriving at Elias’ camp Chuncho is greeted warmly by a young peon. He tells Chuncho they need more guns and they have little food. Chuncho tells him he has brought plenty of guns and a machine gun for Elias. He stops eating the loaf of bread he has in his hands and gives it to the young man who thanks him and takes a few bites but turning around sees four young children and gives them the bread and bacon to divide between them. Bill is looked upon suspiciously but Chuncho says he is his friend. 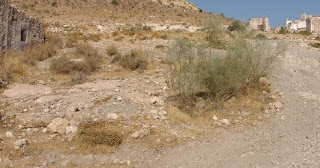