The first samurai: How a Japanese actor created the 'macho' role model 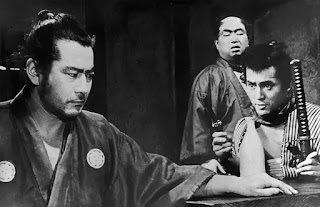 Sixty years ago this month, one of my favorite films hit the cinema screens for the first time. "Yojimbo," directed by Akira Kurosawa and starring the inimitable Toshiro Mifune, was an instant success in Japan and was to become hugely influential worldwide.

The film gave birth to the spaghetti western genre. Indeed, Italian director Sergio Leone had to compensate Kurosawa for plagiarizing the story in "A Fistful of Dollars," the film that established Clint Eastwood as a major star. In movie after movie, Eastwood's spaghetti western persona drew heavily on the disheveled, toothpick-gnawing ronin ("masterless samurai") that Mifune so memorably portrayed.

The yojimbo ("bodyguard") is an existential hero, cool and ironic, driven by chance and sheer whim rather than the knotty moral dilemmas of Kurosawa's earlier films. Like Eastwood's "Man with No Name," his identity is uncertain. When asked to supply his name, the yojimbo simply improvises one, incorporating the name of whatever flower happens to be in view. He has no backstory, no future plans. He just shows up, turns the world upside down and then disappears. In decades to come, innumerable wisecracking hitmen and mysterious outsiders were to follow in Mifune's dusty footsteps.

"Yojimbo," and the follow-up "Sanjuro" (1962), also directed by Kurosawa and featuring the same character, catapulted Mifune to international fame and made him the first Asian actor to become a global star, a decade ahead of kung-fu great Bruce Lee. Even now, in terms of the quality of his best performances and the films themselves, he remains in a class of his own. Not for nothing did both the readers and the writers of Kinema Junpo, Japan's premier film magazine, vote Mifune the greatest Japanese film actor of the 20th century in two separate polls.

So how and where should such a significant cinematic anniversary be celebrated? My choice of venue was the one remaining Mifune-themed restaurant in Tokyo, in a backstreet of the unfashionable Ningyo-cho district. You won't find many tourists here, even in more normal times. It's an ordinary eatery, offering unpretentious fare to workers from nearby shops and offices. Unusually these days, it retains a smoking corner, which would surely have pleased the cigarette and pipe-loving Mifune.

There is a Mifune space at the back with a wall display listing some of the roles the great man played over the years, as well as the Mifune family crest and a four-character phrase dear to his heart: Yuu Mou Shou Jin, which means something like "ferocious courage and intensity." Yet the decor is unobtrusive. If you have no idea who Mifune is, that's fine too. You can concentrate on your set lunch of curried chicken cutlet, solid value at 850 yen (about $8) with free refills of miso soup and extra rice.

I couldn't help contrasting this modest but enjoyable culinary experience with the chain of high-priced, high-concept Kurosawa restaurants in Tokyo's affluent dining districts, which are clearly aimed at tourists and businessmen with generous expense accounts. Somehow, the difference between the restaurants seems to symbolize the two men's artistic reputations.

In a 2018 BBC poll of the best non-English language films, as chosen by global film experts, two Kurosawa films placed in the top four. Oddly, the one country where no experts included a Kurosawa film in their personal top 10 was his own country, Japan. Overseas, though, the late director goes from strength to strength. It was recently announced that a British version of the Kurosawa classic, "Ikiru," is in production, with a script by Sir Kazuo Ishiguro, winner of the 2017 Nobel Prize for Literature.

Despite his enduring domestic popularity, Mifune's legacy been less well tended, not least by himself. Suffering from financial troubles at the film production company he set up in the mid-1960s, he appeared in too many films, Japanese and foreign, that were unworthy of his talents. Worse, he allowed himself to be typecast as a generic samurai and gruff military commander. Among more than 150 films he made, he played Adm. Togo Heihachiro, the man who sank the Russian fleet in 1905, twice. Likewise he had two shots at Adm. Isoroku Yamamoto, commander of the Pearl Harbor attack. These were roles he could sleepwalk through.

Whereas Kurosawa ended his life garlanded with honors, having made an artistic and box-office comeback with his two historical epics, "Kagemusha" (1980) and "Ran" (1985), Mifune's career fizzled in a series of underwhelming performances. Ill with Alzheimer's and abandoned by his mistress, he cut a forlorn figure. The relationship with Kurosawa, whose films captured his most sublime performances, had soured long before. Indeed, after filming "Red Beard" (1965), the director and the leading man never spoke again, although they both lived into the late 1990s.

The late critic Donald Richie blamed the estrangement squarely on Kurosawa, though Stuart Galbraith IV, author of "The Emperor and The Wolf," a double biography of the two men, suggests that their creative relationship had been exhausted. What is certain is that no other actor could do what Mifune did in "Red Beard" -- play a humane, progressive doctor who singlehandedly beats senseless a gang of thugs, all the while reproaching himself for unprofessional conduct. Somehow Mifune makes it look totally credible, to the extent that you wince on behalf of the bad guys.

Both men later acknowledged that their best work had been done together. After the rift, Mifune's range narrowed and Kurosawa's leading actors, although excellent, lacked the feral vitality that makes Mifune's on-screen presence so compelling. In "Yojimbo," the combination is at its peak, with the main character being a joint creation of actor and director. The dialogue is minimal. The nature of the man is in the way he moves, eats and laughs. Watch Mifune toss a stick in the air at the crossroads to determine which direction to take; move with feral grace toward a pistol-packing psycho; gaze down from a rooftop at the deadly factional battle he has engineered, like a film director pleased with his handiwork. He seems to be made of some harder, denser substance than everyone else.

The film feels as fresh today as it did in 1961. As I finish off my meal in the restaurant that bears his name, I realize that Mifune, like all true cinema greats, is still with us now.