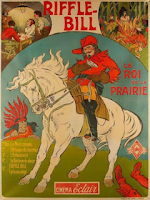 Riffle Bill articles from 2018 Finland with excerpts from 1909

Assorted reviews from 1909 regarding the serial Riffle Bill from an article: mykkatodistaja.blogspot.com/2018

At the beginning of the 20th century, France was the superpower of film, and especially westerns that were made there. One of the first western heroes on the screen was Riffle-Bill, who appeared in five films made by Victorin-Hippolyte Jasset for the Éclair company between 1908 & 1909. Riffle-Bill was preceded by Jasset's popular Nick Carter detective series, and later followed by a series about the pirate Morgan. This Buffalo Bill-inspired protagonist was played by actor Henri Gouget.

Riffle-Bill's first adventure to play Finland was “The Attack on a Postman” (L'attaque du courrier), which in France had been released as the second part of the series. The two hundred metres, or ten minutes long film, premiered on 27 September 1909. The presenter was only listed as Mr. S. A. It played the Helsinki Biograph Theatre. The cinema announcement included a list of scenes from the film, but a better understanding of its contents is given by a Swedish plot description:

Syn: "During this time the postal service, handled letters and articles of value for delivery and, a crook and his comrades agree to ambush the mounted postman. They shoot at the rider, who escapes, but falls badly wounded to the ground. The money is stolen and placed in a hiding place.

The postal courier, manages to barely climb onto his horse. Wounded, he arrives at a shooting range where Riffle Bill is working.

The mailman cannot describe any of the masked bandits. Nearby, recklessly, the culprits announce to their accomplices that they have not been discovered. The leader's demeaner has raised Riffle Bill's suspicion, who goes on the lookout for others. The bandits feel threatened. They follow Riffle Bill, and passing a large tree, one of the bandits throws himself down from a branch on to Riffle Bill's horse while the others pull him out of the saddle.

Riffle Bill, now a prisoner, is trapped inside a hollow tree, where the bandits want to burn him. He climbs to the top of the tree and taunts the bandits.

One of the bandits, is captured by the lasso of the fearsome scout, who shows him the place where his accomplices have hidden the loot. Riffle Bill returns it to the mailman who thanks him..."

- "Anyone who likes to see well-made adventure photo plays should check-out Riffle-Bill, a helper of those in need" said the Savon Sanomat, on May, 2, 1909).

Unfortunately, this is no longer possible, as the series has not survived. One consolation is that the third part of the series, “The Settler's Beautiful Daughter” survives in fragments.

The synopses describes the film's plot rather than the artistic merits.

A Mexican loves a young and beautiful farmer's daughter, but his offer is rejected by both the girl and her father. He dresses as an Indian, and he and his assistants arrive at the farm, rob the girl and light the house on fire.

When the emergency is greatest, Riffle Bill arrives, learns what's happened and goes after what he thinks are Indians. After finding a clue, a handkerchief that fell to the ground, he soon arrives at the scene where the farmer's daughter has been hidden. Meanwhile the Indian chief and a Mexican have an argument over the girl and Riffle Bill takes the opportunity to free the girl and take her back to her father.