Who Are Those Guys? ~ Teodoro Corra 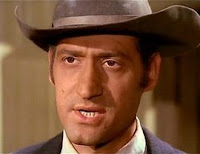 Italian character and supporting actor Teodoro Corra was born Teodoro Agrimi in Rome, Italy in 1934. Once Corra established himself as an actor he branched out as a screenwriter and then as a production manager and producer. Almost all of his films were westerns and crime-based films. He also appeared in a few giallos and erotic films and seemed to follow the path of whatever films were popular at the time as the Italian film industry tried to keep pace with both American and other European popular genres of the day. Corra can also be founded using the aliases among others, Theo Grim and Doro Corra, which he used quite extensively in his 13 western film career.

Corra usually showed up on the wrong side of the law as a slick gambler, man of the cloth, or uncouth town boss. Specialized in playing villains that the audience loved to hate. He always turned in an excellent performance.