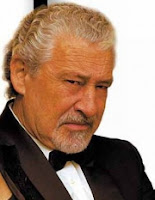 Paco Hernández was born Francisco Javier Hernández Méndez in Zamora, Castilla y Leon, Spain. He was a theater, film and dubbing voice actor for Paco dedicated a large part of his professional work to dubbing. Among innumerable other characters, he was the voice for such Hollywood actors as Charles Bronson, Bill Cosby, Morgan Freeman and the Spanish voice of Professor Xavier from the X-Men film saga and the voice of Zordan of Power Rangers. Paco died in Majadahonda, Madrid, Spain on October 28,2009.