We continue our search for filming location for “A Bullet for the General”. A priest is seen praying over one of the dead soldiers when a bandit rides up. He’s ‘El Santo’ another priest but the brother of ‘El Chuncho’. The priest sees he is a man of God and asks how he can live with the bandits and he replies, “Christ died between two thieves, didn’t he? Christ was always with the poor and the down trodden.” He takes the priest crucifix and rides away. Another of ‘El Chuncho’s’ men rides up, shoots and kills the priest. 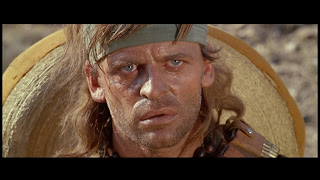