Who Are Those Composers ~ Nini Rosso 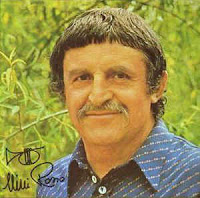 Raffaele Celeste Rosso was born in San Michele Mondovi, Italy on September 9, 1926. His parents wanted him to attend the university but Nini as he was called chose the trumpet over academia and left home. He participated in an anti-fascist brigade against the Nazis and Fascists in Valle Maira. After the war he worked in night club but it was shut down by the police so he returned home for a while before continuing his career. He soon became one of the best-known jazz trumpeters in Italy, reaching the pinnacle of his career during the 1960s. His recording ot “Concerto Disperato” was covered in England by Ken Thorne in 1962 and became a hit under the retitled “The Theme from The Legion’s Last Patrol”. Rosso’s original was quickly released by the Durium label and also made the charts, but was less successful than the cover version. In 1965 he had a worldwide hit with “Il Silenzio” and went to #1 in Italy, Germany, Switzerland and Austria and eventually sold five million copies by the end of 1967. It reached #32 on the US Billboard charts.

Rosso was also an actor and appeared in around a dozen films including “Little Rita of the West” in 1967.