In the 1968 Sergio Leone classic “Once Upon a Time in the West” an arch is prominently seen in several flashback scenes where a man is shown with a noose around his neck is standing precariously on the shoulders of a boy while several rough looking toughs watch. Frank the main villain of the movie is seen walking slowly toward the young boy and they puts a harmonica in his mouth and tells him to keep his brother company. Suddenly the older mand kicks the boy away and dies suspended by the rope. This arch was built especially for the film production. Little remains today as weather and fans of the film have reduced it to a few adobe bricks and rocks. The arch is located at the edge of monument valley to the north of route 163 on the way to Medicine Hat. 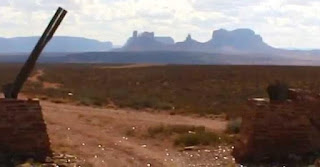 This scene was filmed in Monument Valley, Utah.