ALMERIA, Spain – “Attention everybody,” says a man in a red polo shirt, speaking in Spanish “Let’s do this scene very lively, with animation like professionals”.

Somebody else shouts “Sound” in English then “Accion” in Spanish. Five hundred Spanish extras begin to revue and another Western movie is launched in this hot barren part of southern Spain.

Before the year is out the province of Almeria, just across the Mediterranean from North Africa, will come close to having been the location for nearly 200 movies. The dusty canyons and blowing sand make it a mecca for American and Italian film companies producing westerns.

Almeria’s natural shoot-‘em-up’ geography and cheap Spanish labor were discovered more than a decade ago. Since then even the Russians have gotten into the act with a couple of documentaries. Likewise the Swiss, English, French, Germans and, of course, Spanish.

Just now Faye Dunaway, she of the no-bra look, is here making a movie with Stacy Keach and Harris Yulin.

Even with rising prices, Almeria still tops them all as a most economical place to film a Western, say movie executives. Their estimates range from half to one-eighth as much as in the United States. It has become a principal industry for the fellows around Almeria, once referred to silently as “the backside of Spain”.

“We do well with the movie people”, says Diego Fernandez, who operates a fleet of taxis shuffling movie personnel to movie locations.

“It hasn’t solved the essential unemployment problems,” says Juan Martin Canimores, an electrician in Tabernas, a genuine town a few miles from the manufactured Western town of where the United Artists Western ‘Doc’ is being filmed. He has worked in three movies as an electrician but he didn’t get a job this time.

Several hundred Spaniards did. One scene calls for 285 extras to mill about a version of Tombstone, Ariz.

For doing this Aragiaston Becerra Carrillo, 43. father of seven and unemployed, gets 430 pesetas a day, or $6.42 a day. Spain’s per capita income is $720 annually.

Director Frank Perry says a minimum of 200 Spaniards must be hired full time just to keep the film going in Spain. At times, Perry says, he is employing 2,000 people and housing and feeding many of them.

Most American movie companies are estimated to behind a minimum of one million every time they film in Spain. Often it is two or three million.

Moviemaking has opened the way to tourism, brought horse stables back and gives the city and airport with a daily flight to Madrid. Almeria’s population 1in 1968 was 36,000. Today it is estimated at 120,000. Land prices increased 12-fold.

Most Spanish credit Andre de Toth, the Hungarian born American film producer, with opening up Almeria. De Toth made “Lawrence of Arabia” in the early ‘60s after discovering miles of sand dunes and an oasis complete with palm trees hidden in a ravine just a few miles away.

Today within a 20 mile radius of Almeria, there are six filming sites, three with permanent Western towns for rent.

‘Doc’ has side streets, a graveyard and 36 buildings some newly built and some remodeled. The bars and businesses bear authentic names from Tombstone plus a few that production designer Gene Callahan named after friends from his home town of Baton Rouge, La.

[Thanks to Mike Hauss for the submittal.] 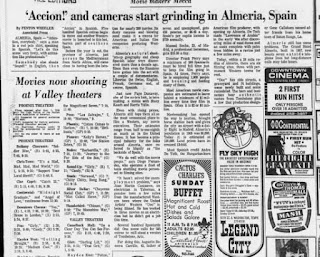