When Tomas Milian met co-star Walter Barnes on the set of “The Big Gundown”, Milian told the 6-foot 3-inch Barnes, who played pro football with the champion Philadelphia Eagles in 1948-1949, he was convinced they had met somewhere in the past. After reminiscing for a while, both actors discovered they had been at the University of Miami 10 years before. Milian was a student at Miami while Barnes coached on the football team. 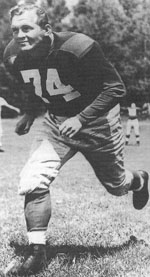