The Bridge in La Calahorra, Granada, Spain was used on the Calahara Express line and was seen in many Euro-westerns. It spanned the Rambla Fiñana which was usually dry most of the year and became a wash during the rainy season for a few weeks out of the year. The bridge was an expansion bridge and therefore did not interfere with any camera shots and was used primarily as a break in the scenery as the trains travelled over the mostly flat barren prairie. 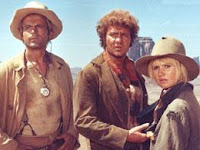