And now Grimaldi had landed one [Archived newspaper article]

It was morning deep in the Almeria mountains, high on a rocky ledge beneath a herd of grazing goats, an Italian film company was hard at work.

The movie they were making was a fanciful tale of violence and runaway passion called “Indio Black”, produced by Alberto Grimaldi, the producer of the early Leone films, directed by Frank Kramer (Gianfranco Parolini), director of 29 highly forgettable sagas of the American West. This was a hard-core spaghetti western. There was no live sound; the voices of the actors would be looped in later in English, in Italian, in German and French and Japanese and Vietnamese and whatever other language seemed to offer the possibility of a new market. There were no expensive lights, only bits of aluminum to reflect the sun, no enormous mounted cameras, only a small stationery unit on a wooden tripod; no armies of young assistant directors running around screaming for quiet. Even the bottled drinking water did not arrive here in ice-packed plastic garbage cans unloaded from the backs of trucks; it came instead, an agonizing trickle at a time, in straw baskets borne by donkeys who labored up the winding trail within clear view of the sweltering crew, bobbing slowly, kicking up small puffs of dust, lugging their precious cargo inch by inch though the scurrying desert lizards and the torrid sun.

Shooting was almost completed; only fill-in footage remained. Kramer, wearing a comic-opera sailor’s cap and the engaging smile of a born clown, would work with blinding speed, wrapping up six scenes in a day.

[A pile of casualties from a spaghetti western. A member of the Guardia Civil (behind dummies) must be on the set whenever firearms are used.]

In a leather director’s chair planted solidly in the only square of shade available, the star of the picture – Yul Brynner – sat quietly awaiting his call.

It has become automatic among the makers of spaghetti westerns that a picture must have one recognizable star, preferably and American, and most preferably one suffering career agonies severe enough to work for less money. Since the enormous success of the early Leone films and the resulting boost in the career of Clint Eastwood, the hard-eyed killer in “A Fistful of Dollars”, this problem has eased somewhat. Down-on-their-luck film stars and TV actors fresh out of series material have come flocking to Rome, hoping to find Spaghettis of their own, thinking that with a little luck lightning might strike once more. The producers been most happy to accommodate them occasionally with a percentage of the gross, more often with a straight—and not too star-like—salary. The term “star” after all, has always been a relative one. 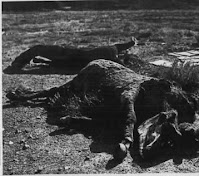 [Two “dead” horses made from real horse skeletons and horsehide and stuffed with bundles of straw.]

[Thanks to Mike Hauss for the submittal.]