Today marks the 50th anniversary of the premier of “Matalo” directed by Cesare Canevari, Nico Ducci, and Mino Roli (I guess just one person didn’t want to have to take credit for this mess) and starring Lou Castel, Corrado Pani, Antonio Salinas, Luis Dávila and Claudia Gravy.

Bart (Pani), a young outlaw eager to kill in cold blood, is saved from the gallows by his friends a group of ruthless bandits in order take possession of a gold shipment. He joins three shady characters – Phillip (Dávila), Ted (Salines) and Mary (Gravy) - who attack a stagecoach carrying two hundred and fifty thousand dollars. During the robbery Bart is shot and left for dead, while his accomplices reach an abandoned town, Benson City, with the loot. Their intention is to stay hidden for a few days. Sometime later a widow (Diana Sorel) and a young Australian named Ray (Castel) who is a peaceful young man whose only weapons are a few boomerangs arrive in town. Suspicious, Phillip and the other two imprison them and torture them trying to find out about a non-existent secret. Taking advantage of a temporary absence of Phillip and Mary, however, Ray manages to break free and kills Ted. Meanwhile, Bart, who is still alive, is determined to get rid of his accomplices. He goes into hiding waiting for the right moment to steal the money. During a furious shoot-out, however, Bart is beaten to death by an old lady Gertrude Benson (Ana María Noé), the sole inhabitant of the desolate town. Indifferent to the gold left by the bandits, Ray walks away with the widow.

They Called Him Matalo – English title 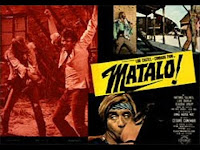