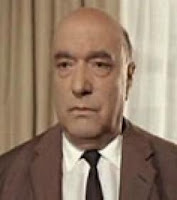 He started dubbing c. 1951 and went on until as late as 1993, this possibly being his year of death. Such obscurity is disconcerting in a forty-year-plus career spent dubbing leads, which includes Alberto Sordi, Victor Mature and Telly Savalas. Moreover, he dubbed Orson Welles, no less, in the standard Spanish-language version of CITIZEN KANE created at Arcofón and the presence of Welles himself at some sessions (He also dubbed Welles in the version of Bert Gordon’s WITCHCRAFT that played in Spain). So much distinction but I have found no information on the human being from whom that slightly ironical bass sound emanated. At a dinner I recently had with a dubbing buff I had previously known online, we chatted, of course, about Spanish dubbing and he told me that Cordero (or so he was told by another Spanish dubbing aficionado) was a bachelor who lived alone with his dog. Anyway, since Cordero was an Arcofón regular, it is inevitable that he should have boomed some in a few Jess Franco movies. They are listed above. Additionally, he was the Spanish voice of Joseph Cotton in BARON BLOOD, the police inspector in GRAVEYARD OF HORROR. He also did Lee Van Cleef in THE GOOD, THE BAD AND THE UGLY, BAD MAN’S RIVER and the second of two dubs of THE GRAND DUEL. The first had starred José Martínez Blanco, whose voice (although that of a baritone rather than a bass) is often confused with Cordero’s. One source, in fact, indicates that Cordero dubbed Howard Vernon, whereas in reality it was Martínez Blanco. What I find disconcerting is that Arcofón should have so often used these two men playing different characters in the same scene.