Rome – Franco [wrong this is Ciccio] is tall and thin, with bug eyes, a thick thatch of hair and a pencil-thin mustache.

Ciccio (pronounced chee-chow) [wrong this is Franco] is short and sturdy, with bug eyes, a thick thatch of hair, no mustache but a mouthful of teeth like piano keys.

To the movie world outside Italy, Franco Franchi and Ciccio Ingrassia may be complete unknowns. On their home ground they’re the most sensational comedy team ever to appear on screen.

The Italia film world has never seen anything like the success they’ve enjoyed in the past few years.

They began in pictures in 1958 and are now going so strong that every second film turned out in this country seems to be one of theirs. They crank out as many as two full feature films a month.

Franchi and Ingrassia don’t aim for art. Give the public what it wants is their motto. They followed a rigid pattern of corny repartee and outrageous sight gags – knocks on the head with a hammer, fists in the face, toilet seats hung around the neck, pie in the eye and all the rest. Inevitable props are luscious Italian starlets in a minimum of clothes, giving the pair opportunities to exercise their eyeballs.

“We do the same thing over and over again”, says Franchi, “It’s because the public likes us this way. If we changed, we’d be finished.”

They specialize in spooks of other films. This means they have to work like fury to keep up.

But they like that and love their popularity, “Popularity is something we wanted”, says Franchi, “We never wear dark glasses to hide from the public”. 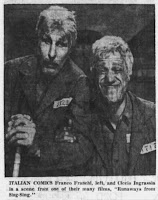 Quick and slapdash as the Franchi-Ingrassia pictures are, the public can’t seem to get enough of them.

When a recent James Bond movie appeared in Italy under the title “Secret Agent 002”, Franchi and Ingrassia whipped out a quick spoof called, “Most Secret Agents 002”.

An Italian made western titled “For a Fistful of Dollars” brought the inevitable Franchi-Ingrassia takeoff: “For a Fist in the Eye”.

The two grew up together in Palermo, attended the same schools, had the same friends and worked out comedy routines for local entertainment.

Their first real break was a spot in a Milan review in 1957. After that came movies and television.

They work so much together they stay completely apart off set.

“We’ve never fought”, said Franchi, “But we get awfully tired of each other. We live on opposite sides of town, you know, never see each other outside of work. We don’t even travel together.

But both are sure they can’t do without the other.

“We were born as a team and we’ll die as a team”. says Franchi.