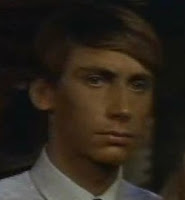 Italian actor and singer Gianni Dei died on October 19, 2020 in Italy. He was born on December 21, 1940 in Bologna. After graduation from high school he moved to Rome to become an actor. He was given a role in Mario Camerini’s “Via Margutta”. He then when on to appear in 43 films, mostly comedy, thriller, police and musical ‘B’ films. He also had a singing career from 1988 to 1994 where he released five LPs. He appeared in one Euro-western playing Steven Vermont in “The Sheriff Won’t Shoot”(1965).
Posted by Tom B. at 8:16 AM