Who Are Those Guys? ~ Enzo Consoli 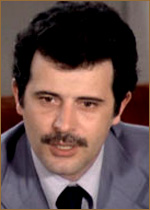 Vincenzo Benito Consoli was born in Catania, Sicily, Italy on July 19, 1939. After an early debut as a child actor on local theatrical stages, it was a meeting with the actor Turi Ferro that gave him the turning point in his career: it was Ferro’s teachings that made the young Consoli a professional actor.

At the same time, in Catania of the 1950s, the young actor's activity ranges in the field of entertainment from shows to cabaret, especially in the company of his friends Pippo Baudo and Tuccio Musmeci.

In 1956 Consoli began to become noticed beyond the island borders, thanks to a national tour with stops in Bari, Bologna, Genoa, Florence, Naples and Salerno in the Compagnia dei Berretti a rattles formed, under the impulse of Ferro, among the university students of the city of Etna.

After the pioneering beginnings in the small hall of the Angelo Musco Theater thanks to the financial sacrifice of the notary Musumeci, the first permanent theater in the south of Rome, that of Catania, the artistic son of Ferro, was built. Thus under the guidance of the latter, a group of excellent actors - such as Michele Abruzzo, Ida Carrara, Tuccio Musumeci, Pippo Pattavina, Umberto Spadao and Maria Yolo allowed Consoli to improve his artistic talent and, at the same time, to refine his authorial sensitivity.

At the end of the 1950s, while attending the University of Catania, Consoli was hired as a clerk in the office of the Etna Land Registry. There he began to collaborate with the Sicilian branch of RAI as an entertainer in the radio program "Il fico d'india", together with Tony cucchiara, and Pippo Baudo. In 1961 he won a scholarship at the Experimental Center of Cinematography in Rome. He then abandoned both his post and the University of Catania, to move to Rome, where

he met masters, graduates, students and of course colleagues who later became famous such as Silvano Agosti, Marco Bellocchio, Liliana Cavani, Nesto Almendros, Claudia Cardinale and many others.

Graduating in 1963, in order to make ends meet, he takes his first steps in the dubbing industry which will then allow him to become an important representative, first as a voice actor and later as dubbing director, adapter (with over 100 films), partner and director of administration of the NCD.

The artistic career of Enzo Consoli - which is still mainly in the world of theater is declining - after the Sicilian experience, he continues in Rome, Milan, Genoa and then in France, Switzerland and particularly in East Germany.

In cinema - which, like television, will occupy a secondary place in Consoli's career - he works in over thirty films, including many commercial films and some more important films. He made his debut in his early twenties as a supporting actor in Il bell’Antonio 1960, by Mauro Bolognini.