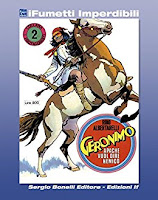 Issue #2 was about the life and legend of Apache War Chief Geronimo which was published in October 1974.
A nickname with which Goyathlay, the historical Apache chief born in 1829 in the territory that now corresponds to the state of Ariziona, soon became the leader of the last Native American tribes who opposed the decision of the US government to lock them up in reserves. Considered bloodthirsty by American settlers, for the Apache people he was the hero who fully embodied the aggressiveness and courage of his own race. Furthermore, because of his apparent invulnerability to the bullets, it was believed to be endowed with supernatural powers. Defeated in 1882 and forced into a reserve, Geronimo escaped almost immediately and regained the struggle that ended four years later with his capture by General Miles. Transported to Fort Sill, Oklahoma, he would remain there until his death in 1909, after dictating an interesting autobiography. 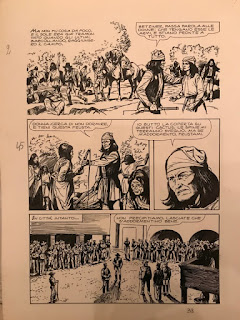