We begin a new search for filming locations for “The Big Gundown”. The opening scene shows three tired men climbing the rough terrain into the mountains. Suddenly they meet a man sitting by a campfire smoking a pipe. The three men are outlaws in search of a fourth outlaw named Gullick. They ask the man with the pipe how things are here in Colorado and he tells them, “Bad for outlaws, especially those wanted for murder. If they don’t believe him, ask Gullick”. He points behind them with his pipe. The men turn and see the outlaw hanging from a tree. They now understand the man they have been talking to is Jonathan Corbett. Since they men are out of ammunition for their guns he puts three bullets on a log allowing each man to take a bullet and defend himself against his gun. He shoots two of the men but the third surrenders. As Corbett inspects the dead men the third tries to grab his gun from his holster and Corbett shoots and kills him also.

This scene was filmed in the pine forests of the Sierra De Guadarrama mountain range. 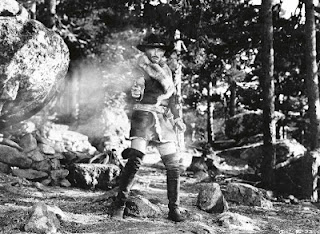