Since the beginning of April, the Karl May Museum in Radebeul has a new boss. Christian Wacker is the name of the 51-year-old archaeologist and museologist. What plans the new boss has for the museum, he reveals in the DNN interview. 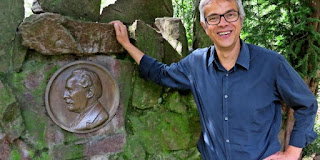 The archaeologist and museologist Christian Wacker (born 1966 in Munich) has been director of the Karl May Museum in Radebeul since the beginning of April. What are the plans of the new boss has for the museum, he reveals in this DNN interview.

Question: Mr. Wacker, since the beginning of the month you are director of the Karl May Museum in Radebeul. Have you settled in a bit?

Christian Wacker: I have only been here for three weeks and so far only had one weekend where I was able to look around privately in the region. I also used this time intensively. For example, I did a great bike ride to get a bit in touch with my new home. The first impressions are extremely positive. I feel very well.

They speak of new homeland. So Radebeul is not only your new place of work, but you have also moved your residence to the Lößnitzstadt?

C.W. Yes of course! I live in Radebeul. My wife and I were lucky enough to have found a beautiful apartment in Altkötzschenbroda. New home also for the simple reason that it is very important, especially when working in the museum area, to solidarise with the place of work and to network there as quickly as possible. After all, the Karl May Museum is not an island, but we have to keep in contact with the cultural scene here in the city as well as Dresden and the surrounding area. And therefore it is necessary to gain a foothold quickly.

Your previous stations as a museum director included, for example, the German Sports and Olympic Museum in Cologne and the Olympic Sports Museum of Qatar in Doha. Since they each had to do with the topic of sports. How did you come to Karl May?

C.W. The Karl May affinity is certainly very high in my generation. Whether Winnetou or Old Shatterhand in the Wild West or Kara Ben Nemsi in the Orient - we all grew up with his adventure stories and fictional characters. And the imprint you learn from the literature you read at a young age is immensely high.

You have now got to know the Karl May Museum for three weeks. What are the strengths of this temple of muses?

One of the great strengths is the solidarity of the team. Collaboration and cohesion work incredibly well and are not self-evident. On the other hand, the museum radiates a great emotionality. As an Indian museum it was for example in GDR times on everyone's lips. Many families visit the place today. Therefore, many connect with this house beautiful childhood memories. This emotional element has a lot of potential to build on.

After the visitor recalculation had lessened in recent times, he grew again last year. In 2017, the museum welcomed 57010 guests, some 4,000 more than in the previous year. Furthermore, the museum celebrates its 90th anniversary this year. Mr. Wacker, what are your plans for the future of this house?

C.W. We will expand and continue what works well, such as the Indian romance. But I also think that you cannot reduce this institution to an Indian museum, as happened in GDR times. That's why Karl May has to focus more strongly again. Here, I propose to promote topics around his life and work stronger, especially the Orient. On the one hand, this theme offers the opportunity to combine the fairytale world, the illusory world of "Thousand and One Nights", with the stories of Kara Ben Nemsi, when one thinks of family visitors. On the other hand, there are strong opportunities for influencing the current society and the day-to-day confrontation with the Near and Middle East. More than 100 years ago there were very strong orientalising tendencies, as for example the construction of the cigarette factory Yenidze in Dresden shows. Karl May was a child of that time and to some extent an author of oriental studies. To understand that epoch and to reflect on current topics, excites me. In short, the opening up of the museum to Karl May is a concern to me.

Will this make Indianism shorter?

C.W. No! The Indian Exhibition will not be cut. On the contrary: A new building is planned, an extension of the museum area to Meißner Straße. This creates more space and opportunities for exhibitions and the presentation of our exhibits.

Can you already tell when the start of construction will take place?

C.W. For a start of construction, it is currently too early. Over the next four months, we will be teaming up to develop a master plan. For us, the content design, what we want to implement where and how in the enlarged museum, is the focus of attention first. And the future exhibition concept is not yet discussed and planned. Only when the future museum concept stands, we will go into the further planning and seek the talks with the funding agencies. This way is also useful. For the content of a museum must harmonize with the architectural shell.

Current Cabinet Exhibition "Winnetou is living ...! 80 years of Karl May on the Felsenbühne Rathen "in the Villa" Shatterhand ", opening times Tuesday to Sunday 9 am to 6 pm, closed on Mondays (except public holidays)
Posted by Tom B. at 5:47 AM