Who Are Those Guys? ~ Maxwell Caulfield 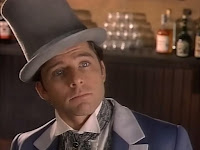 Maxwell Newby was born in Belper, Derbyshire, England on November 23, 1959. He was born to Oriole Rosalind (née Findlater) an Peter Newby in Belper, Derbyshire — although he later claimed to be a native of Glasgow, reportedly to be "more interesting". By 1965, his parents had divorced. Although not a child actor per se, at age seven he played Ted (under the name Maxwell Findlater, using his mother's maiden name) in the 1967 film, “Accident”. The film's screenplay was written by Harold Pinter and starred Stanley Baker, Dirk Bogarde and Michael York.

The actor's American stepfather, Peter Maclaine, a former Marine, reportedly kicked Caulfield out of the house at the age of 15. Caulfield became an exotic dancer at London's Windmill Theatre in order to obtain an Equity card enabling him to work as an actor. Later he got his green card through his stepfather. He reportedly took his stage surname, Caulfield, from the character in J.D. Salinger's novel Catcher in the Rye. Today he is an English-American film, stage, and television actor who is based in the United States. He has appeared in films such as “Grease 2” (1982), “Electric Dreams” (1984), “The Boys Next Door” (1985), “The Supernaturals” (1986), “Sundown: The Vampire in Retreat” (1989), “Waxwork 2” (1992), “Gettysburg” (1993), “Empire Records” (1995), “The Real Blonde” (1997), and “The Man Who Knew Too Little” (1997) and a recent appearance is as the king in “A Prince for Christmas” (2015).

Caulfield has been married since 1980 to actress Juliet Mills. The couple garnered media attention, as Mills is 18 years his senior, He is the son-in-law of veteran actor Sir John Mills and writer Mary, Lady Mills and brother-in-law to his wife's siblings, Jonathan Mills and actress Hayley Mills, as well as uncle to Hayley Mills' sons, Crispian Mills (lead singer of indie band Kula Shaker), and Jason Lawson.

In May 2015, he toured Australia with his wife, Juliet Mills, and sister-in-law, Hayley Mills, in the comedy “Legends!” by Pulitzer Prize winner James Kirkwood. He’s also a voice actor and voiced James Bond in the video game James Bond 007: Nightfire (2002).

Not known for his westerns he did appear in one Euro-western “Backlash: Oblivion 2” (1994) as the character Sweeney.