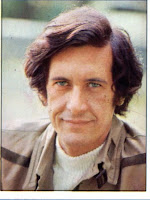 Italian entertainer, singer, playwright, actor Tony Cucchiara died in Rome, Italy on May 3, 2018. He was 80. Cucchiara was married to singer Nelly Fioramonti (Maria Grazia Fioramonti) [1939-1973] and together they formed a folk duo in the 1960s. She died in 1973 during childbirth of their second child. Tony was a writer for several RAI TV shows and also a playwright. His daughter is singer, actress Annalisa Cucchiara. Tony was a performer in the 1966 Euro-western musical “A Fistful of Songs”.
Posted by Tom B. at 10:41 AM