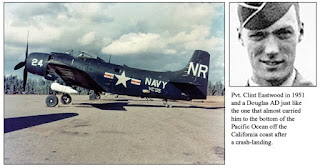 Somewhere under the undulating Pacific Ocean, two to three miles off the coast of Point Reyes, is the airplane Army Pvt. Clint Eastwood was aboard when the pilot ditched it in 1951.

Now more than 66 years later, the search is on for the aircraft that was part of a real-life drama for Eastwood, long before he would become a Hollywood star.

“What was going through my mind was just a stark fear, a stark terror, because (in the) first place, I didn’t know anything about aviation at that particular time — I was just hopping a ride,” the actor said in 2015, recalling the incident in which the pilot also survived.

The future actor and director — 21 at the time — was en route back to Fort Ord after visiting his parents in Seattle when the Navy bomber he was on crashed into rough seas.

“In those days, you could wear your uniform and get a free flight,” he said in a talk at Loyola Marymount University’s School of Film & TV. “On the way back, they had one plane, a Douglas AD, sort of a torpedo bomber of the World War II vintage, and I thought I’d hitch on that. Everything went wrong. Radios went out. Oxygen ran out. And finally we ran out of fuel up around Point Reyes, California, and went in the ocean. So we went swimming. It was late October, November. Very cold water. (I) found out many years later that it was a white shark breeding ground, but I’m glad I didn’t know that at the time or I’d have just died.”

The incident, which was reported in a front-page story by the Independent Journal, occurred on Sept. 30, 1951, and has caught the interest of Walt Holm, who works with Berkley-based Open ROV, which builds and operates underwater drones. He wants to find the wreck and has started posting archaeological information on National Geographic’s Open Explorer site, which promotes expeditions.

“I’m a bit of an amateur archaeologist and when I heard about this incident I thought it would be an interesting thing to post on Open Explorer,” Holm said. “It’s not significant in terms of archaeology, it won’t re-write the history books, but it’s of public interest because of his public persona and it’s a chapter of his life that not too many people are aware of.”

According to an account posted by Holm, two Navy AD-1 Skyraiders left Naval Air Station Seattle for a routine flight to Mather Field in Sacramento.

But one of the planes had radio problems, got separated from the other in bad weather and then got lost. While the pilot eventually managed to get into clear weather, he ran out of fuel while flying down the California coast and had to ditch at about 6:25 p.m., putting Eastwood in a life or death situation off Point Reyes.

“It makes you wonder how if he had drowned, how would have that changed history,” said Holm, who started the project dubbed “The Hunt for Clint Eastwood’s AD-1 Skyraider” last year. “It’s a human interest story.”

Part of the reason for posting the project on Open Explorer is educational, Holm said.

“We will walk people through the process of doing a historic investigation in a marine environment,” he said. “It’s a project that is close to home for us.”

There were several accounts of the incident, which makes it difficult to pinpoint the crash site, Holm noted.

“We will just have to jump in and go. We do have to wait for the right seas, which is likely in the fall,” said Holm, who gives his effort 50/50 odds of success. “The seas are rough off of Point Reyes and we will be in small boats. We could have a weather window this summer.”

Holm will utilize a side scan sonar device, which is adept at picking up obstructions on the ocean floor and often used in the shipping industry. The airplane could be as deep as 200 feet below the water’s surface, he said.

“It works best if the aircraft is on a flat, smooth area,” Holm said of side scan sonar. “But if you look at the underwater terrain off Point Reyes there are boulder canyons and if it’s in there it will be hard to see. No matter what, it’s going to be fun.”

James Delgado, the retired director of maritime heritage for the National Oceanic and Atmospheric Administration’s Office of National Marine Sanctuaries, looked for the Eastwood plane as part of larger search of aircraft and shipwrecks between 2013 and 2016.

“Eastwood’s Skyraider was one of the targets, but nothing turned up,” Delgado said. “But I think there is a real chance it could be found.”

While not historically significant, the Eastwood airplane search draws attention to the larger effort of finding craft that have been lost at sea, incidents which also had a human toll in many cases.

“It highlights the importance of finding everything out there, and in many cases, it helps bring closure for families,” Delgado said.

Two servicemen, who battled a thick gray fog and a strong surf for almost an hour last night following a plane landing in the ocean near the Marin shore, are returning to their service units today uninjured.

Army Pvt. Clinton Eastwood, who wandered into the RCA radio station at Point Reyes after struggling in the ocean, told radio operators he and the pilot were forced to land their AD-2 bomber in the ocean and left on life rafts.

Eastwood said he was returning to Ford Ord from his house in Seattle when the mishap occurred.

The pilot, Naval Lt. F.C. Anderson, landed his life raft on the shore at Kehoe Ranch near Pierce Point. He is stationed at Mather Air Force Base in Sacramento.

Men at the station said Eastwood walked into the building cold, wet and in a state of shock and spoke incoherently of the plane running out of fuel and how the pilot made a dramatic landing on the rough ocean.

Earl Foster of Inverness, a radio operator on duty at the station last night at 6 p.m. when the 21-year-old serviceman pounded in the station door said:

“The boy was dazed and in a state of shock. He could hardly speak.”

Foster added he was able to piece together certain parts of the private’s story. From his disjointed speech the operator learned that the plane was landed upright on the water by the pilot.

After the landing the two servicemen jumped into the rough sea and inflated two rubber life rafts only to maneuver the crafts away from the plane in time to see it engulfed by the water.

Eastwood explained that he and Anderson kept their life rafts together until they hit the breakers near the rocky Marin coast. At this point, he stated, they were separated. Eastwood said he continued to paddle through the strong surf until he was thrown from the raft.

The serviceman told Foster each time he advanced toward the shore, the strong breakers would carry him out to sea again. At one spot, he said, he was almost drawn down by the undertow.

Eastwood said he could not say how long he was in the water. When he reached shore though, he recalled, he fell to the ground and crawled to the station house.

After a brief rest in the house where he was warmed, Eastwood was taken to the Coast Guard Life Boat Station at Point Reyes where he met Anderson. At the station the men received medical attention and started on their way back to their units.

An officer of the Coast Guard station said security restrictions prevented any report concerning the plane which was no longer visible in the ocean. He refused to comment on the possibility of recovering the aircraft.]