In 1951, the future film star went down off the California coast in a Navy Skyraider. The plane’s been missing since then–but that could soon change.

On September 30, 1951, a Navy AD-1 Skyraider on its way from Seattle to Sacramento lost its escorts in the fog off the coast of Northern California. Low on fuel, the pilot had to ditch. He and his passenger survived impact, but the swim back to shore, off Point Reyes, was rough and they barely made it.

But survive they did. And the modern history of American filmmaking is far richer because of it. The passenger who nearly drowned on that fall day in 1951 was a then-unknown army private named Clint Eastwood.
October 1, 1951

For 66 years and change, that Skyraider has been lost in the ocean. Now, a team from a Berkeley, California, has set itself an ambitious goal: “We’re going to find that plane.”

Today, National Geographic announced it has acquired Open Explorer, an online storytelling platform for explorers and scientists to document and share their projects. Open Explorer was originally launched by OpenROV, the Berkeley operation that has built a $1,500 underwater drone known as Trident that’s capable of performing tethered camera operations up to 100 meters from a small hub that sits on the surface.

When OpenROV CEO and founder David Lang started Open Explorer in 2014, he meant the site as an answer to this question: “If Darwin were alive today, how would he have kept his notes?”

With the relaunch of the site, National Geographic is highlighting the work being led by OpenROV lead electrical engineer Walt Holm, who since last August has been using Open Explorer to document the archival research he’s done to try to pinpoint the location of the Eastwood plane.

Holm’s work to find the Skyraider began when OpenROV was looking for interesting use cases to demonstrate the Trident’s capabilities. One was a close up examination of the USS Conestoga, a Navy tug lost at sea in 1921 after departing San Francisco for Pearl Harbor. In 2009, the National Oceanic and Atmospheric Administration discovered the ship’s general location near the Farallones, a small group of bird-covered islands off the San Francisco coast, and then its exact position was found during surveys by remotely operated underwater vehicles (ROVs) in 2014 and 2015.

During its 2009 surveys, NOAA identified a few targets they hoped to investigate. One was thought to potentially be a Navy Skyraider lost at sea off Point Reyes in 1951. Russ Matthews, a filmmaker and aircraft historian–and friend of Holm’s–had worked on the 2014 and 2015 survey and mentioned the plane to Holm, for whom aviation history is an interest. “Russ mentioned that one of the crew members from the ditching is still alive, and that . . . got my attention,” Holm wrote last August. “It’s great to have the ability to connect the past to the present, through the eyes of the person who was actually right there. Then Russ mentioned that the crew member’s name was Clint Eastwood. BOOM!”

Holm was transfixed. His first question, though, was whether or not OpenROV’s technology was capable of finding the Skyraider. When he dug through NOAA charts, he found that the seafloor off Point Reyes was at a depth of about 200 feet–well within the range of a Trident, especially after first narrowing in on the plane’s location with side-scanning sonar equipment.

Narrowing the search area is the trick, of course. Shallow or not, no one at OpenROV had the time for exploring endless thousands of square miles of seabed for a plane, no matter who had been on board. Eastwood himself had mentioned the plane crash at least a couple times, but resulting articles gave little insight into precise coordinates.

But a Navy document on the ditching and contemporaneous newspaper clippings did give some clues–including the fact that the future movie director had walked onto the beach and into a local radio station. Other articles, though, contradicted earlier information, yet offered new insights. Besides possible clues about where the plane had gone down, the San Francisco Chronicle referred to the aircraft’s passenger as “a Fort Ord soldier, otherwise unidentified.”

For Holm, figuring out the true spot Eastwood came on shore was just the next step in the puzzle. To determine the actual resting place of the plane would mean sleuthing out tidal conditions and currents on the day of the crash. Exact tidal data wasn’t available, but he found that conditions on September 30, 1951, were remarkably similar to that of September 21, 2017–and perhaps that could clue him in to the direction Eastwood and the pilot had come from.

From Archival Research To What’s Next

Holm’s last Open Explorer update was last September 27. That’s about when OpenROV went into crunch mode in the run-up to the launch of the Trident.

Now that the device is available–it’s already being ordered by the thousands by hobbyists and companies alike–Holm is ready to return to the hunt, especially with the surge in interest that’s bound to come with National Geographic‘s relaunch of Open Explorer.

To Lang, projects like the hunt for Eastwood’s plane are exactly what Trident is good for. But while not everyone will have access to something like a lost Naval aircraft, there’s something in any body of water worth hunting. “We build tools, but our mission is to democratize exploration,” Lang says. “We build tools to make lives more interesting. If you have a Trident, you can share [your work] on Open Explorer.” 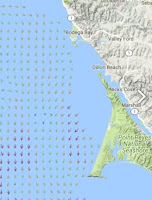 One project likely to show up on the site in the months to come is an expedition OpenROV participated in with the National Park Service to search for World War II bomber lost in a California mountain lake at 11,000 altitude. A 2.5 day hike from civilization, the lake was too far and too high for a serious expedition in the years since geologists spotted wreckage on the lake’s shores in 1960. But not since the availability a device like Trident that is inexpensive and can be easily transported.

As for the Eastwood plane hunt, Holm knows that he needs to move beyond archival research and into the realm of real-world science. That’ll involve the use of side-scanning sonar at some point, and when he finds enough data to suggest that they’ve got likely locations for the Skyraider, they’ll move in with Tridents.

They’ll have to wait until there’s good weather, however. No one wants to spend all day on a boat in the oceans off Point Reyes unless conditions are perfect. So Holm says he will soon have a strike force ready to head out at a moment’s notice. He also plans on posting new material about the project on Open Explorer, especially now that it’s going to get National Geographic promotion.

One thing that gets Holm excited about posting to the site is the likelihood of getting unanticipated help from the public at large. He expects people to write in with new ideas or clues, potential firsthand accounts, or even a willingness to do the brute-force work of looking through public survey data on the chance that there are anomalies already sitting there that no one has yet noticed.

All these years later, it’s fair to ask why anyone should care about the aircraft, especially since Eastwood made it out alive. But to Holm, an amateur archaeologist, the answer’s easy. “Archaeology isn’t about rock piles and weathered timbers and twisted aluminum,” Holm wrote on Open Explorer. “It’s about the human stories that those objects tell. This particular story just got way more interesting.”