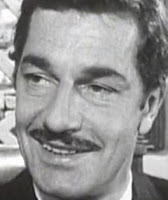 Veteran French Canadian actor Gabriel Gascon died on May 30, 2018 in Montreal, Quebec, Canada. He was 91. Born in Montreal on January 8, 1927 and was known mainly for his theater work but he also appeared in films and on TV. He was the brother of  comedian Jean Gascon. He began his career in 1951 and from 1965 to 1980, he lived in France, where he multiplied the roles in the theater and in front of the camera. Gascon appeared in the Euro-western TV mini-series “The Leatherstocking Tales” (1969) as Doctor Battius.
Posted by Tom B. at 3:44 PM