We continue our search for the filming locations for "The Big Gundown". Knowing the wanted peon is called Cuchillo and he’s a Mexican, Corbett heads south towards the border. He comes to a small village and asks several people if they've seen him. He's treated with silence, until a scarred peon points him out as the man in the barber chair. Unknown to Corbett, Cuchillo has switched places with the barber and hurriedly walks right past his hunter. 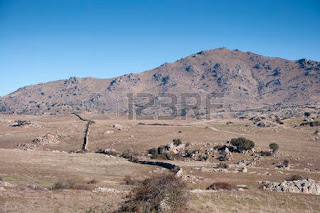 This scene was filmed in the town of Soto del Real north of Madrid, Spain.

For a more detailed view of this site and other Spaghetti Western locations please visit my friend Yoshi Yasuda’s location site: http://y-yasuda.net/film-location.htm and Captain Douglas Film Locations http://www.western-locations-spain.com/
Posted by Tom B. at 6:09 AM