Trovajoli relives in a film-biography 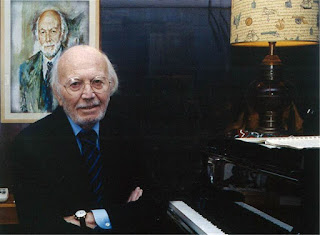 BARI - It's up to Pippo Baudo, Bif & st's television star, who has awarded him the Fellini Prize for artistic excellence, to introduce the jazz 'cine-concert' dedicated to Armando Trovajoli, five years after his death. "I had the honor of becoming his friend," recalled the popular presenter, Bari's master of a master class, "and when I entered his house I felt like I was in a sanctuary, I found an important and solemn man, but never presumptuous. and always noble in the trait and friend in the treatment of friendship ".

And this is precisely what is seen in the documentary Armando Trovajoli Hundred Years of Music, by Annarosa Morri and Mario Canale, a real film (90 'duration) produced by Orme, Surf Film, Istituto Luce Cinecittà and Mana Film in which the great musician makes us relive his entire biography, from his beginnings to his great successes, to the many artistic collaborations through a long interview. The film, made with the advice of his wife Maria Paola Trovajoli, very excited after the vision at Bif & st, and with the musical advice of Maurizio Abeni, born from four long conversations, between the late 90s and 2009 conducted by Morri and Channel that were working on a series on music and cinema.

Trovajoli, born in Rome on September 2, 1917 and died in February 2013, lucidly retraces his musical loves and tells his adventurous life that often intertwines with the cinema. He was just 4 years old when his father a musician - he played the accompaniment to silent films - gave him a small violin, although he wanted an architect. Then at 6, Armando discovers the piano, at 16 he is forced to roll up his sleeves, to help the family, and earns a living (very well) as "Tapeur" or piano bar pianist. His great passions, right away, are and will remain the jazz and the classical: so much to declare "after Bach you should not write music anymore". While his friend Arturo Benedetti Michelangeli once said to him: "Why do you write film music?

After the second world war, which keeps him five years away from the scenes, Trovajoli resumed his musical studies and graduated from the Conservatory of Santa Cecilia. He studied composition with Angelo Francesco Lavagnino, but also wrote songs for the Quartetto Cetra and Nilla Pizzi, he played and arranged music for the radio. The cinema bursts by chance with a song: "El Negro Zumbon" written for the film Anna (1951) by Alberto Lattuada. A world hit sung in play back by Silvana Mangano (the voice was that of Flo Sandos) and also mentioned by Nanni Moretti. In his career there are hundreds of soundtracks, written for Vittorio De Sica, Ettore Scola, Dino Risi, Mario Monicelli, Alberto Lattuada, Luciano Emmer, Steno, Mario Mattoli, Luigi Magni, Sergio Corbucci, Marco Vicario. But, among all, it is precisely that with Ettore Scola the most heartfelt and congenial partnership with titles such as La famiglia, C'eravamo much loved, drama of jealousy, ugly, dirty and bad, until the recent unfair competition.

At the beginning of the '60s the other big meeting, the one with Garinei and Giovannini that gave life to a series of famous musical comedies: Ciao Rudy, written for Marcello Mastroianni, Rugantino with Nino Manfredi, Add a seat at the table, If the time was a shrimp up to Roman Holiday and a new comedy, still unpublished, which is working to bring on stage.

"Trovajoli - underline the authors of the documentary - tells many incidents, such as the jealousy aroused in Federico Fellini by Ciao Rudy, so much that forced Mastroianni to stop the tour and pay a monstrous criminal, more than one hundred million of the time, to honor the contract already signed for the Journey of Mastorna, a film that he never succeeded in making .. With the same lightness, Trovajoli talks about his relationship with one of the greatest pianists of the 20th century: Arturo Benedetti Michelangeli, of what he played for him and concert that they should have held together, and tells us about the relationship with Salvatore Accardo, who asked him for a violin version of the theme of Judith ".

Trovajoli appears in the episode "Anna" by Yesterday, today, tomorrow by De Sica (1963): he is the distinguished gentleman who takes Sophia Loren away to Marcello Mastroianni after the car on which the ill-assorted couple was traveling breaks down: "A car enthusiast, he was a true Jaguar expert," reveals Mario Canale.

"From the first moment - still say the two authors, who will bring the documentary on tour together with a concert - what struck us was the extraordinary humanity and the simplicity it had in telling the moments of a life and an extraordinary career. in which music had always played a decisive role, which is why we decided to tell it by following an almost chronological path but somehow scanditTrovajoli relives in a film-biography or chapters that highlight
Posted by Tom B. at 6:35 AM