Who Are Those Gals? ~ Thelma Buabeng 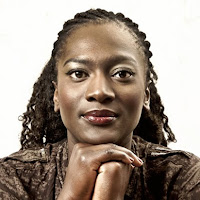 Thelma Buabeng was born in Ghana on March 31, 1981. After studying at the drama school "Theater der Keller" for two years in Cologne, Thelma Buabeng moved to Berlin in 2005, there Thelma Buabeng completed her actor’s training at the "Filmschauspielschule Berlin" in 2009. In 2003, she celebrated her television debut in the ARD cult series “Lindenstraße”. After that Thelma was cast in TV series ‘Der Kriminalist’, and the film "The Adventures of Huck Finn", and she appeared several times in the series ‘Tatort’.

Today she can be seen in various theaters as in 2014 in “Die Schutzbefohlenen” at the Thalia Theater in Hamburg and in 2016 “Meteoriten” at the Maxim Gorki Theater in Berlin.