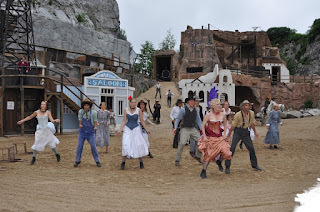 The year is 1870. The blossoming of the Wild West has begun. But mysterious events have overrun the railway construction of Firewood Camp. Unexplained fires break out and trains derail. Charles Leveret, the most powerful man on the scene, and the spirited Saloon lady Kitty LaBelle cannot guess that the warlike Comanchen chief Tokvi-Kava and one of his warriors, has slipped into the camp: the half-blood Ik Senanda. But is he really behind the attacks? Also Kas and Has Timpe, two cousins from Germany, are in the search of a lost inheritance fraud appear in the camp which makes the situation even more confusing. Now only two men can help: Apache chief Winnetou and his blood brother Old Shatterhand. Their adventure takes them into the village of the Comanches, and being shot at by the U.S. cavalry and then into the ruins of an apparently abandoned ghost town.