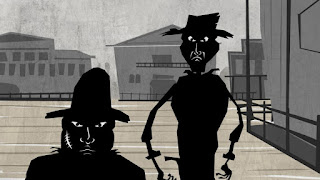 Two outlaws spread panic in the dusty streets of a town in the American Far West until the sheriff comes out to meet him. It's noon and church bells toll. Twelve strokes after, the guns will be drawn out and nothing will be what it seems…