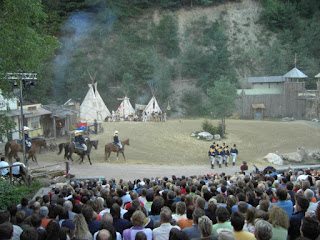 In the beginning, Winnetou and Old Shatterhand are enemies, but then they become friends and eventually blood brothers. As a surveyor for the Railroad Company Old Shatterhand has as his sidekick the cranky Sam Hawkens. In the Wild West he meets the Apache chief Intshu-tshuna and his son Winnetou. The Indians want to prevent the railroad from laying tracks in their hunting grounds. When Klekih-petra, the white teacher of the Apaches, is killed by Rattler the red men dig up the hatchet. After a bitter fight Old Shatterhand falls into the hands of the Indians, but he wins Winnetou’s confidence. At the Apache Pueblo Shatterhand falls in love with Winnetou’s sister Nscho-chi. But then the unscrupulous gangster Santer and Rattler ensure that Winnetou and Old Shatterhand's fate will forever be intertwined.